This helmet is attributed to Sgt. Owen B. Hill of HQ Co. 508th PIR. He wore it during the D-Day drop; landing south of Chef Du-Pont

The helmet is stenciled on the inside of the shell with Hill’s surname and full ASN number. A close-up of the D-bales show they have been repaired after having been snapped off; a common problem with the M-2 and the main reason why it’s production was phased out in 1943. At the time the bales were re-welded to the shell, standard infantry chinstraps were attached. 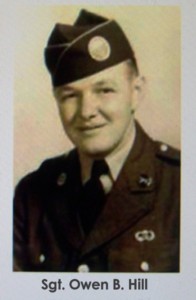 Soon after Pearl Harbor, he enlisted in the Army and volunteered for airborne training. However, he had to complete basic training, before he was sent to the Parachute School at Fort Benning, GA. After he made the five jumps and qualified as parachutist, he was selected for additional training as a communications and demolition specialist. He completed the training, in March 1943, and was sent to Camp Mackall, NC for duty with the 508th Parachute Infantry Regiment (508th PIR). He was assigned to the Hq1 Communications Platoon, and served therein until the end of WW II. At Camp Mackall, he received advanced infantry and airborne operations training. He participated in numerous field exercises, and made parachute jumps with equipment. The 508th sailed from New York, December 28. 1943. Eleven days later, they landed in Belfast, Ireland. After orientations on the local customs, physical training to restore muscles lost during the sea voyage, and weapons firing, they moved to Nottingham, England.

According to Hill; “In early June 1944, the 508th moved to an airport, and completed preparations for entry into combat. We spent many hours studying sand tables, mockups and maps, but no one knew where we would land in Europe. After we were in our C-47 aircraft, we were told the objective was in Normandy.”

“My first combat jump was Normandy, D-Day 6 June 1944 we had blackened our faces because it was a night operation, and carried an enormous combat load, including individual weapons, extra ammunition, explosives, and rations . I threw my gasmask away, and filled the rubber carrier with cigarettes and other goodies, just as others did !”

The record of the C-47 which transported Hill’s “stick” to the drop-zone:

Hill landed near Beauzeville-la Bastille about 2 miles to the South-west of Sainte-Mere-Egliese. This is how Hill described his landing:

“The impact when I hit the water was violent. I was sinking rapidly in the muddy current of the Douve. I couldn’t move and the inescapable feeling of death seized my mind and my body. Finally, my feet touched solid ground and I stood up and pushed myself out of the water. Suddenly a ray of hope – my mouth came up above the water!”

“Others were less lucky and drowned, sometimes even in shallow waters our CO, Capt. Gerard A. Ruddy [ #1 in Hill’s “stick”] was killed almost right after hitting the ground, and Lt. McElligot [ #2 in Hill’s “stick”; WIA June 6] took over . We managed to regroup, after avoiding German patrols, taking cover in hedgerows or hiding in ditches, and met other stragglers, from different units, until we were about 55 strong, under the command of S/Sgt Ray Hummel [#11 in Hill’s “stick”]”.

(Read the story of S/Sgt Hummel’s group during the fight at the Douve river near where it meets the Merderet, June 6- 11, 1944:http://www.508pir.org/pdf_files/bio_hummel_raymond_j.pdf )

A summary of Hill’s D-day experiances by Dominique Francois as told to him by O.B.Hill in 1999:

During the C-47 flight to Normandy, Hill was in the last position of his jump stick. He had earlier changed places with 2nd Lt McElliot as the former preferred to jump directly after captain Ruddy. This last minute change may well have saved Hill’s life as Ruddy was KIA shortly after landing and McElliot received a stomach wound and was shortly thereafter captured by the Germans.

After exiting the aircraft and hanging from the canopy of his opened parachute, Hill could feel small arms rounds striking his equipment. (Later he found that rounds had penetrated his gas mask bag and perforated his cigarettes packages.) During his descent Hill could see the flooded area of the Douve river in the moon-light. He landed in a flooded portion near the river and was able to detach himself from his harness while under un-interrupted fire from a single unseen enemy. Hill evaded this danger and later while under cover he heard footsteps coming in his direction then watched as 4-5 Germans passed close by; “So close that I could have reached out and touched their helmets”

Some time later while moving, Hill heard the challenge word “Thunder”; he immediately responded ‘Oh shit” having completely forgotten the correct response. Fortunately the other soldier remained calm and recognized Hill’s voice. It was Corporal brown from Detroit; one of Hill’s men. They compared their observations and decided that they were heading in the right direction; not too far from the bridge that they had been sent to destroy. They soon encountered another group commanded by Sgt Raymond Hummel from the same company.

In the absence of an officer and with the intention of establishing their position, Both NCOs decided to climb to the upper floor of a farm building. Followed by Cpl MacMahon they made their way to a window that overlooked the road. Suddenly there was a noise that made the building shudder; three German tanks coming down the road (actually French M35 Renault medium tanks which were re-utilized by the Germans) As the middle of the three tanks drew up directly beneath the window, Sgt Hill dropped a Gammon grenade onto it exploding and disabling the engine. The turrets of the remaining two turned in various directions seeking the assailment while the paratroopers withdrew.

The following day, Hill’s group was in a field next to the village, when a group of German soldiers appeared in the courtyard of the barn they were occupying. Hill and Hummel threw grenades into the courtyard but the Germans seeing them, scattered before the detonations. Just at this instant Hill noticed a young french girl who was in the courtyard. After the grenades exploded, he could see no trace of her and believed that she had been killed ( Hill believed so until meeting this same woman while on a return trip some 30 years after the war. She had been wounded and shocked by the blast but had survived) 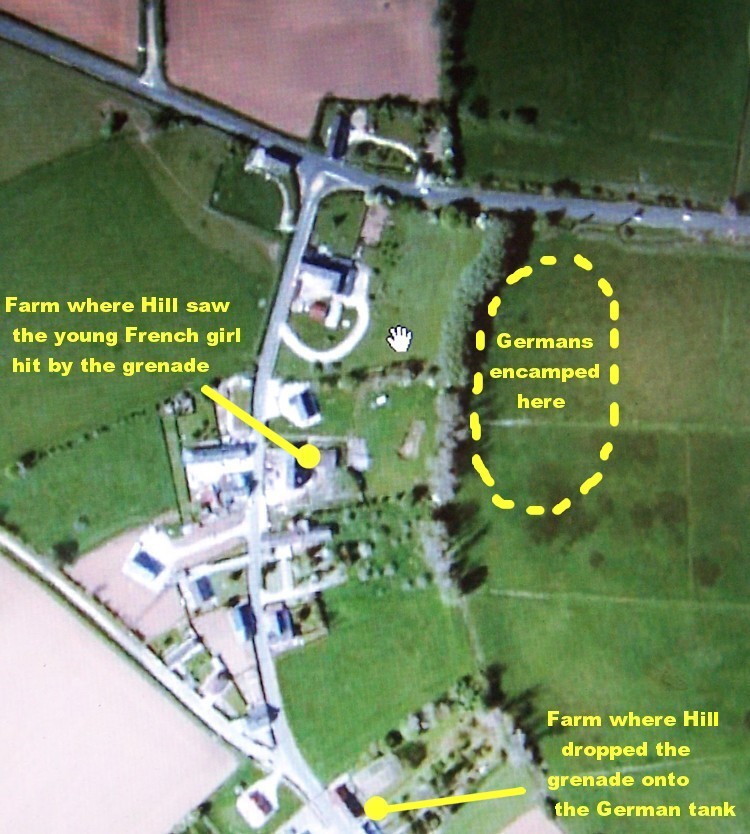 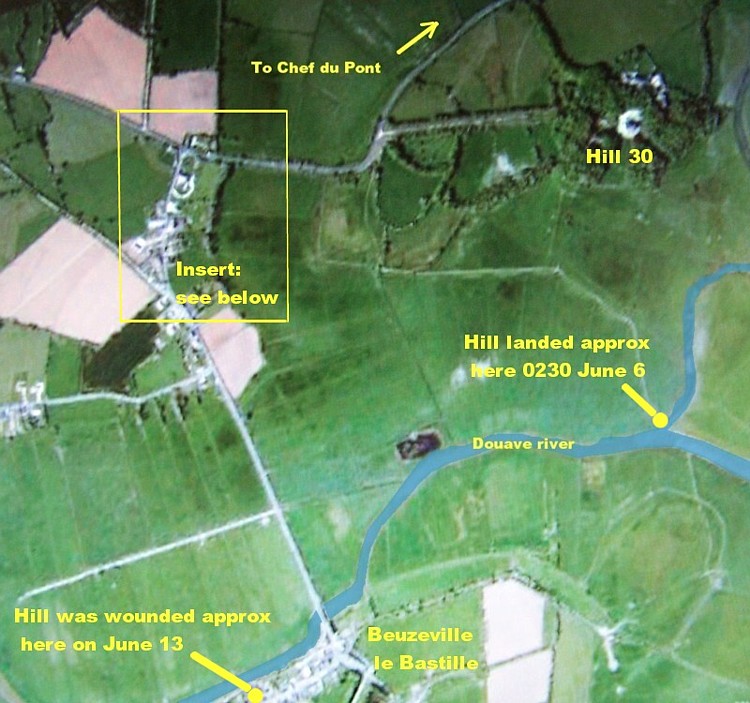 On June 13, Hill was wounded near just south of the Douve river in the village of Beuzeville-le bastille. The wound was serious enough that it caused him to be evacuated from the line and returned to England. It is presumed that this is the point at which he was separated from his helmet as it surfaced decades later locally.

Hill was not able to rejoin the 508 in time to participate in the drop on Holland during Market-Garden. He did return to his unit by the time of Hitler’s Ardennes offensive and was wounded a second time on 26 January, 1945. 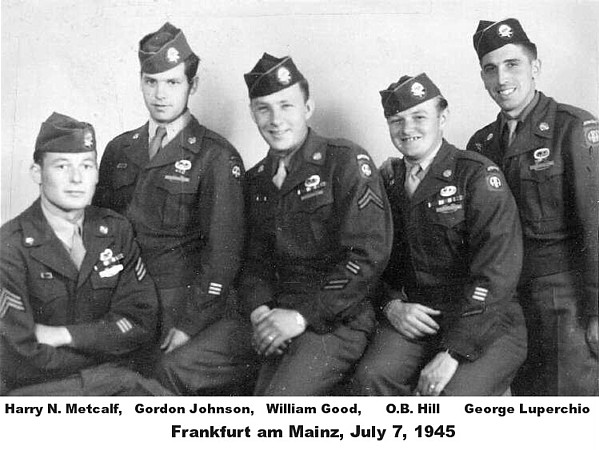 In the above photo, Hill appears missing his stripes as well as a front tooth. Reportedly the results of a run-in several days earlier with a senior NCO.

InAugust 1945, Hill bid an emotional farewell to his comrades and started home. He was separated from the Army in September and joined his family in Southern Indiana. O. B. Hill immediately enrolled in the University of Evansville and graduated in 1950 with a degree in Accounting and Business Management. For the next two years, he worked for the Internal Revenue Service and then entered private industry as an accountant. 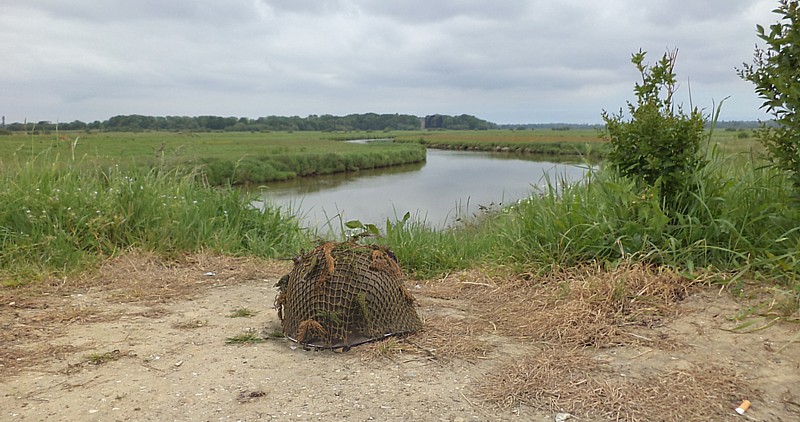 Normandy, France: I took Hill’s helmet back to France during the summer of 2012. I wanted to photograph it as near as possible to the place where Hill landed on June 6. The area on both sides of the Douave is swampy so I settled for the spot near the bridge over the Douave at Beuzeville la bastille. The place where Hill landed is in the distance around the second curve of the river.

Left: Normandy, France: Two memorial stones erected near the site of the bridge south of Chef du Pont. One dedicated to O.B. Hill and the other dedicated to men of the 508th

Right: The memorial to O.B. Hill.

This 1998 Photo shows Owen Hill standing in front of a street sign in Chef du pont. A street named in his honor.