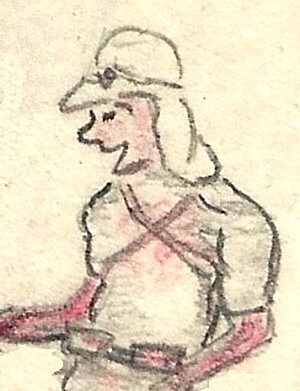 I’d like to introduce you to Japanese Private Sugiura Shizuka. I don’t have a photo of him. I don’t actually know what rank he held. I know nothing about him outside of what can be learned from the pages of a sketchbook that he created in 1943-44 while serving with the Imperial Japanese army’s 6th Division on Bougainville.

You see; This sketchbook was taken from his corpse after he was killed sometime in March of 1944. It was taken by William Garrison of F company, 129th regiment of the US 37th Division. Known to his friends as “Dude” Garrison; This soldier from Michigan brought home a number of souvenirs from his time in the pacific. Some of them were of a fairly grizzly nature and had obviously been taken from Dead Japanese soldiers.

We can deduce that the Japanese solder; Shizuka was with the IJA 6th division because that unit was moved onto Bougainville island in 1943. The unit was composed of the soldiers from Miyazaki, Kumamoto, Oita and Kagoshima prefectures; located in the south of the mainland island of Kyushu. I have a friend from Japan who has determined that the writings are in the dialect of Kagoshima province; hence the identification of Shizuka as a member of the 6th division.

The battle of Bougainville commenced in the fall of 1943 when allied landings gained a foothold on the island. The campaign lasted through the beginning of 1944. A major Japanese counter attack took place along the middle of the western coast of Bougainville between March 9 and March 17, 1944. The 6th division took part in this counter attack and lost about 60% of it’s infantry strength in a single attack. It is assumed that Shizuka fell during this period as the writing on the cover of the book indicates that it was taken from his body on March 16th.

The following drawings show us that Shizuka was at ease expressing himself as a Japanese patriot. He believed in; and of course; supported victory over the Americans. He also was sentimental about his home-life, somewhat artistic and was appreciative of poetry. The drawings are simple yet many are executed with a familiar knowledge of facial structure and anatomy. Some are just doodles of random objects which may have been in his sight while he was drawing them. His name appears only once as a signature to one of the drawings. Had he not signed that one; his work would have remained anonymous. No doubt that Shizuka never gave a thought that his art-work would live so far beyond him. 75 years later and in another hemisphere his drawings provide us with a glimpse of his life; his experience; the culture from where he came. We can browse his pictures now; free from wartime vilification, judgment and racial hatred. In doing so; we may open up just a bit and think of the man through the images that he left us.

This is a picture of the cover of the book. The following images are in the approximate  order that they appeared in the book; although the binding was by a simple string or ribbon run through two holes at the top of each page. Each page has the printed words: “note pad” so the book was obviously not intended for the record which Shizuka made of it. 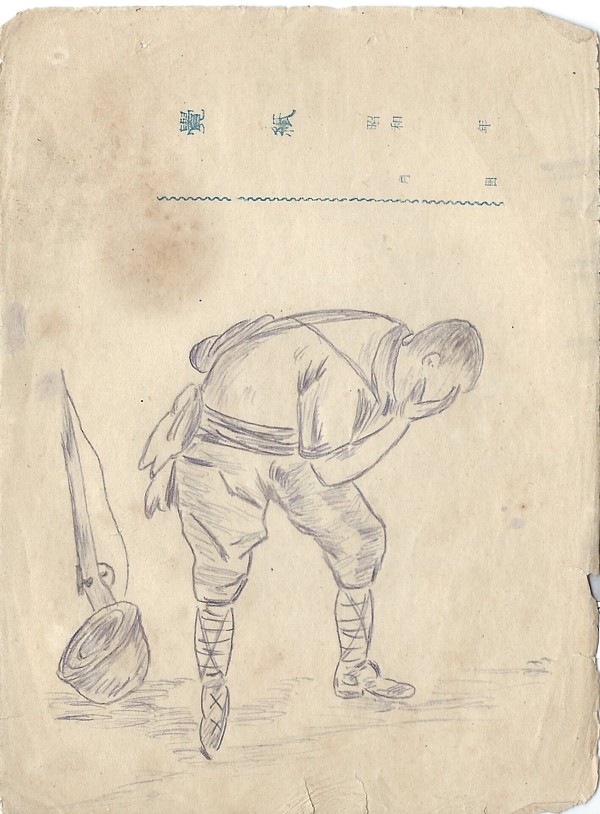 This soldier is either washing his face or he is bent over in some sort of distress. 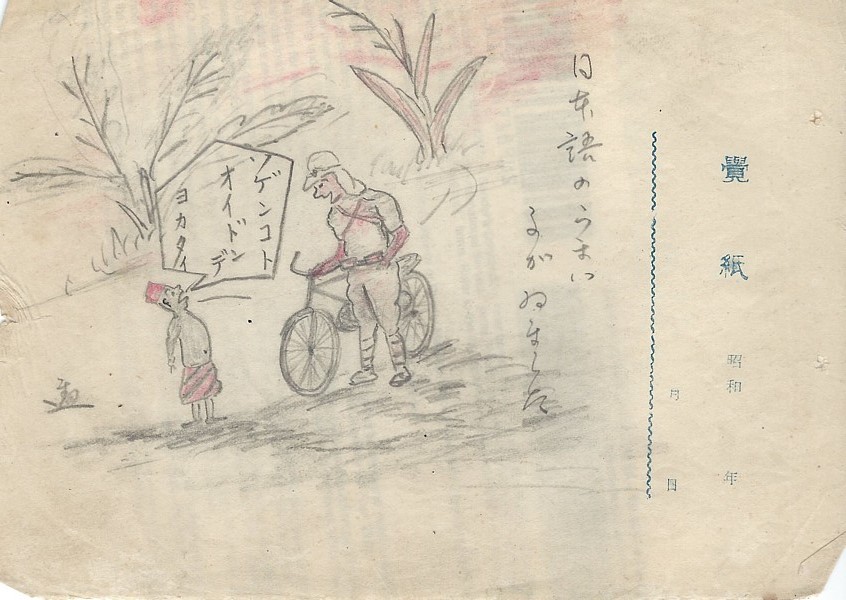 The artist’s caption is written at left of the drawing and as usual with Japanese script, it reads from top to bottom: “I met a local boy who speaks good Japanese”. This is the only drawing where we can assume the figure to be of the artist himself. Note that he wears standard rifle ammunition pouches; indicating the likelihood that he is a common soldier with no rank. 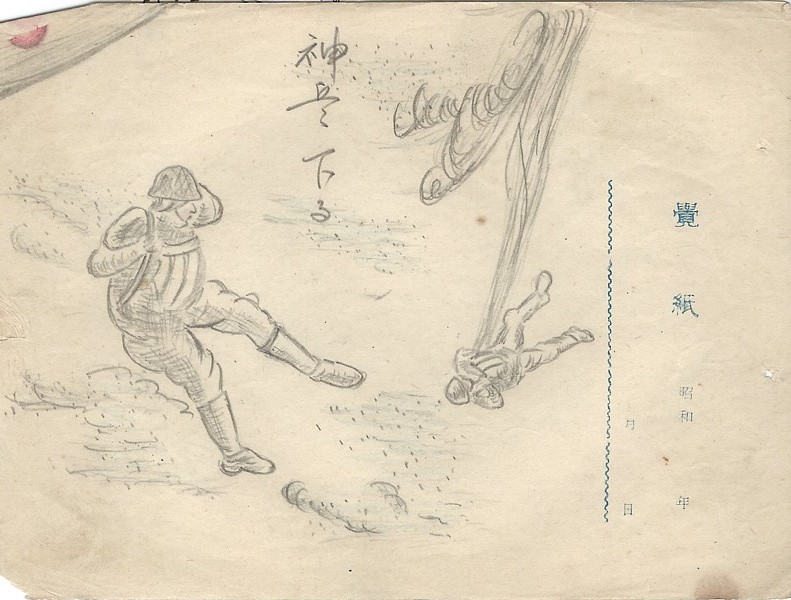 The caption reads “God’s soldiers dropping”. The term God’s soldiers refers to the nickname given to men of the Japanese army’s 2nd parachute regiment. This unit was deployed in Sumatra rather than Bougainville so the image is something that the artist imagined, rather than witnessed. 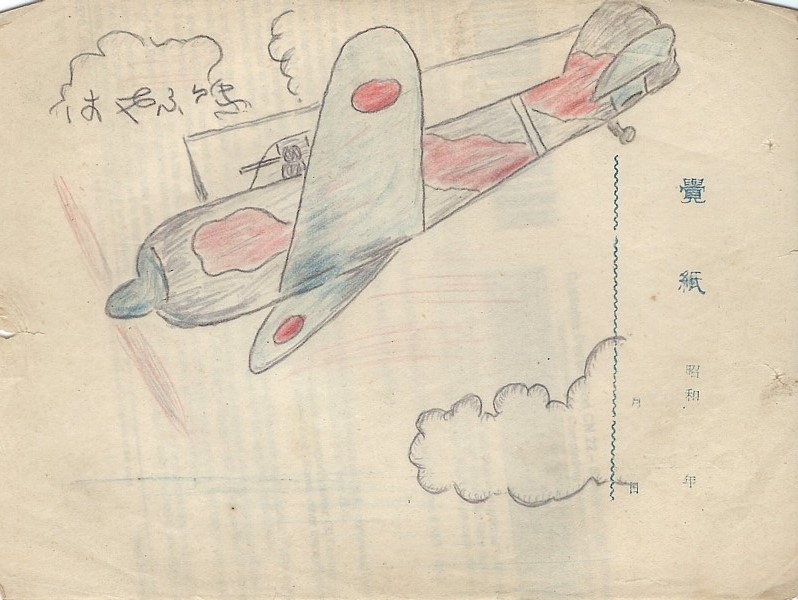 A Nakajima Ki-43 fighter plane used by Army units. The picture is captioned “Hayabusha” which translates to “Peregrin Falcon” which was the unofficial name of the Ki-43.  Comparing with a photo of the Ki-43 below; it is easy to identify. 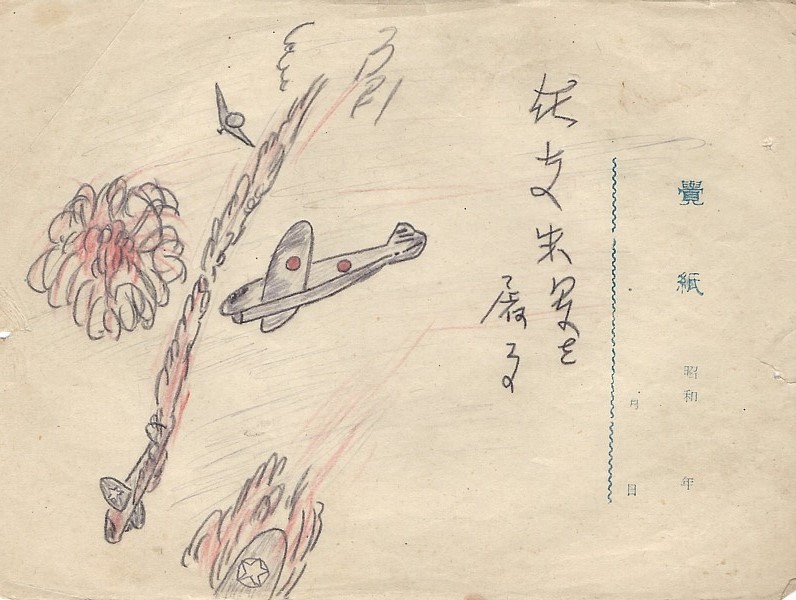 A rather fanciful image of American fighter planes being destroyed by the victorious Japanese flyers.  The caption reads “Shot down American volunteer group planes” 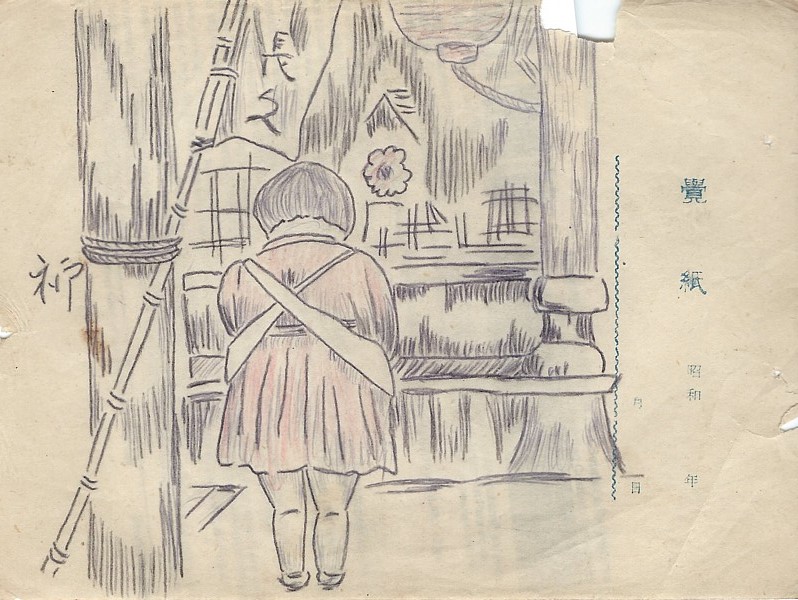 A woman worshiping at a shinto shrine 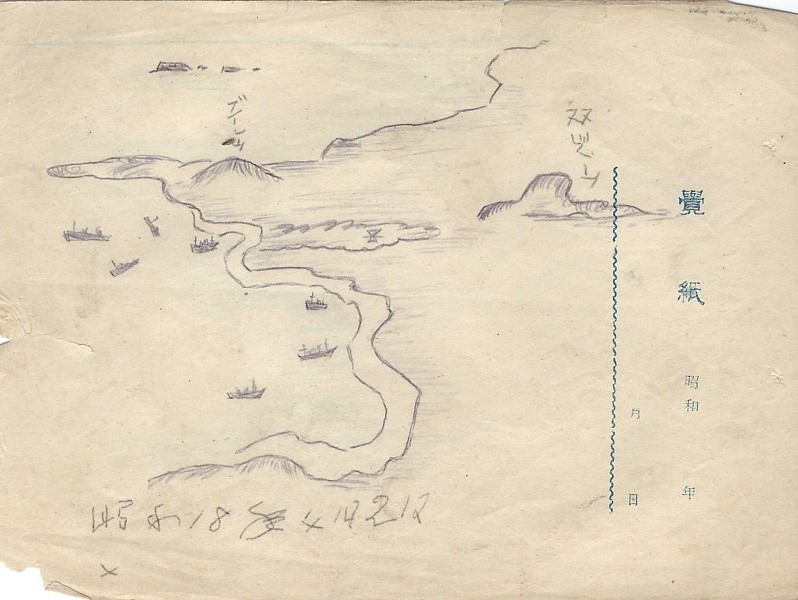 A map of a coastal town which is dated April 2, 1943; presumably along the coast of Bougainville Island 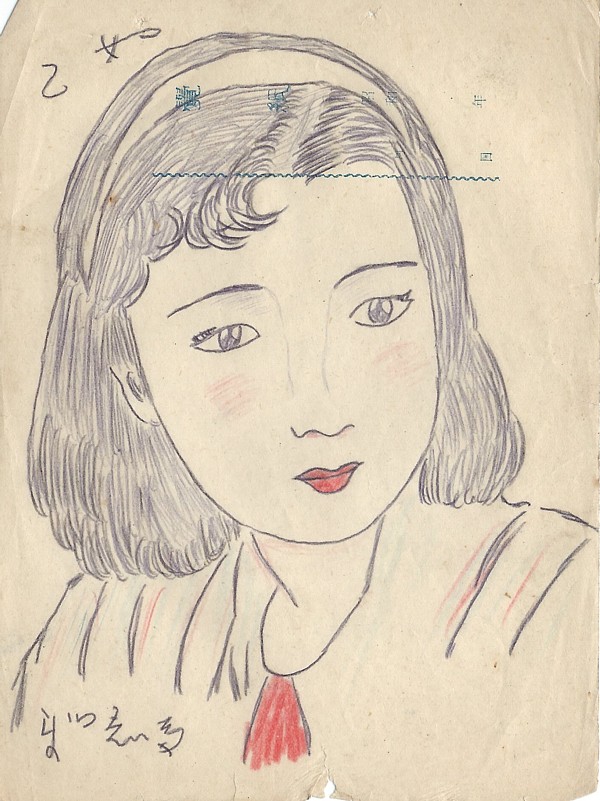 The caption says “A maiden” 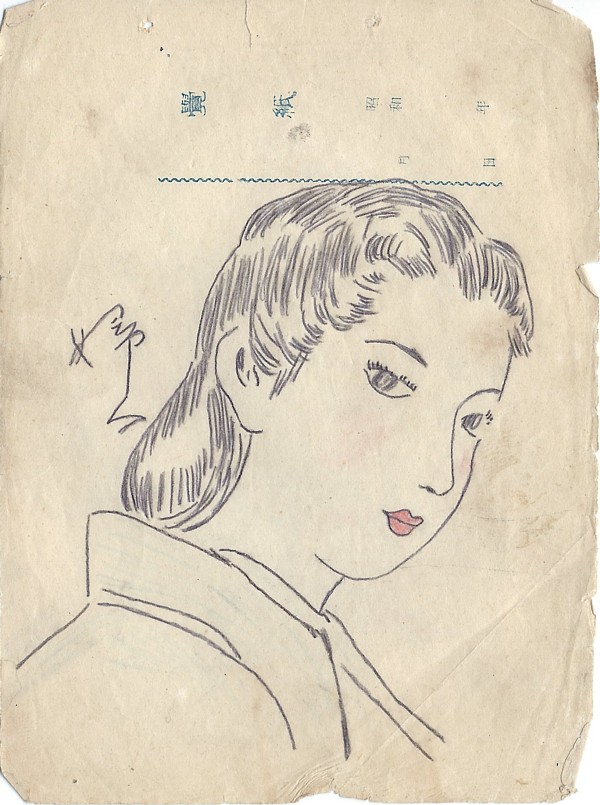 The caption says “A lady” 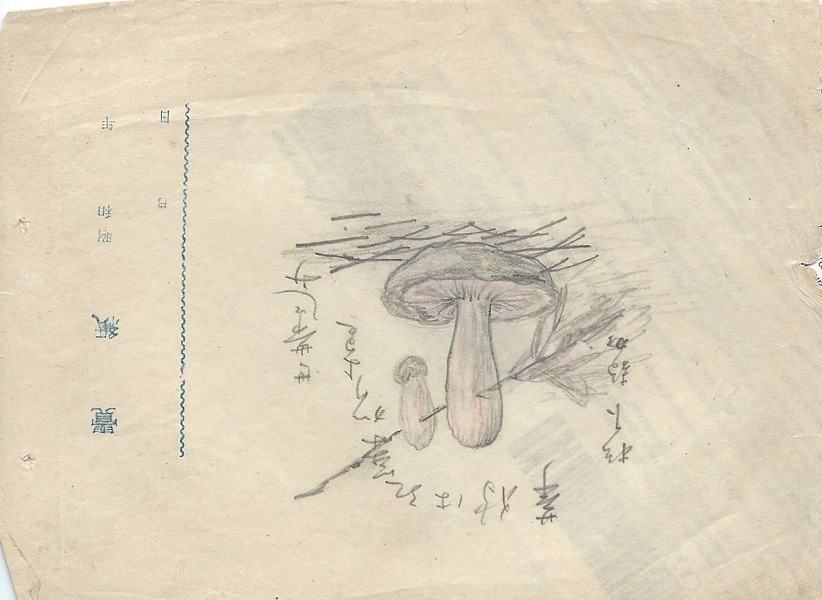 This is a drawing of a mushroom known as “Matsutake” in Japanese and “pine Mushroom” in English. The charecters written in a semi-circle around the mushroom form a Haiku Poem; that is a short Japanese poem in the form of 3 verses composed of a total of 17 syllables. Here I paraphrase: ” Mushroom hunting is a boring affair compared to Leaf Peeping (Tree gazing)”

To the left is written the name “Sugiura Shizuka” from which comes the assumption that this is the soldier’s name.

The following sketches have yet to have their captions translated. 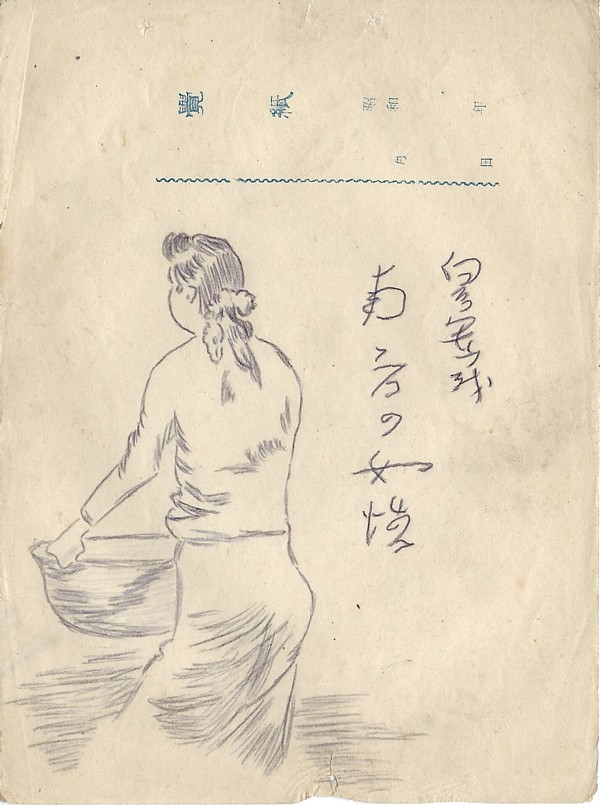 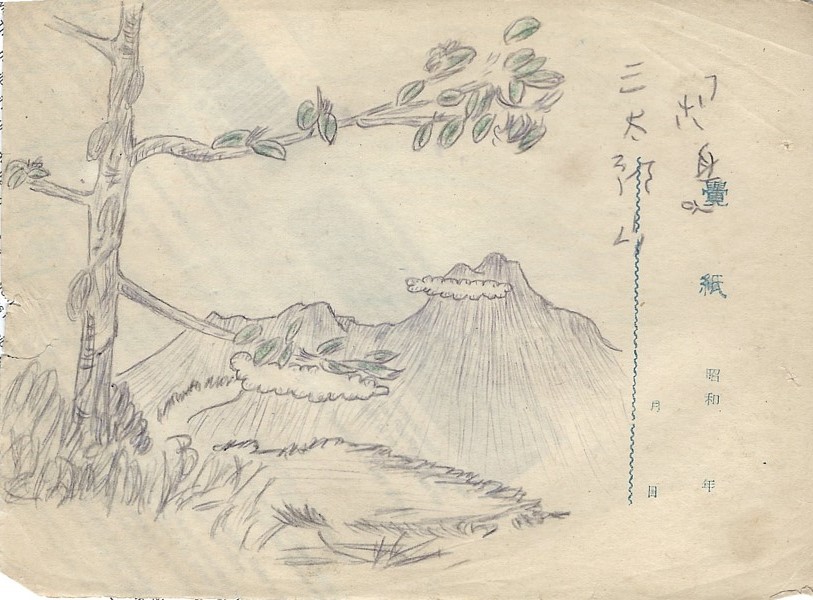 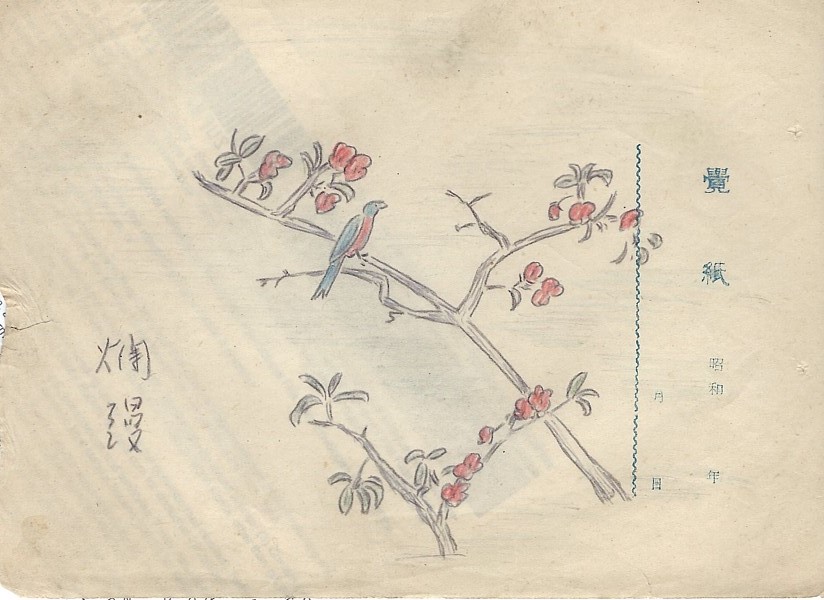 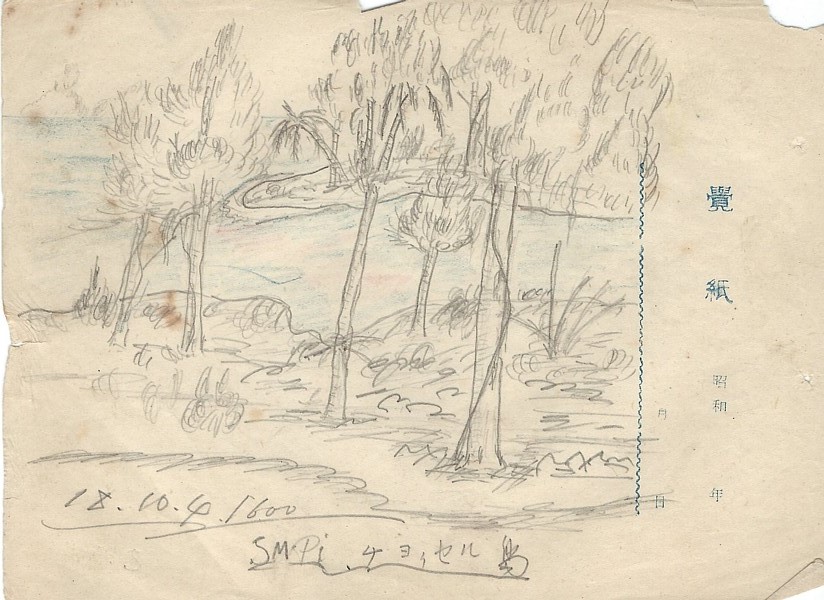 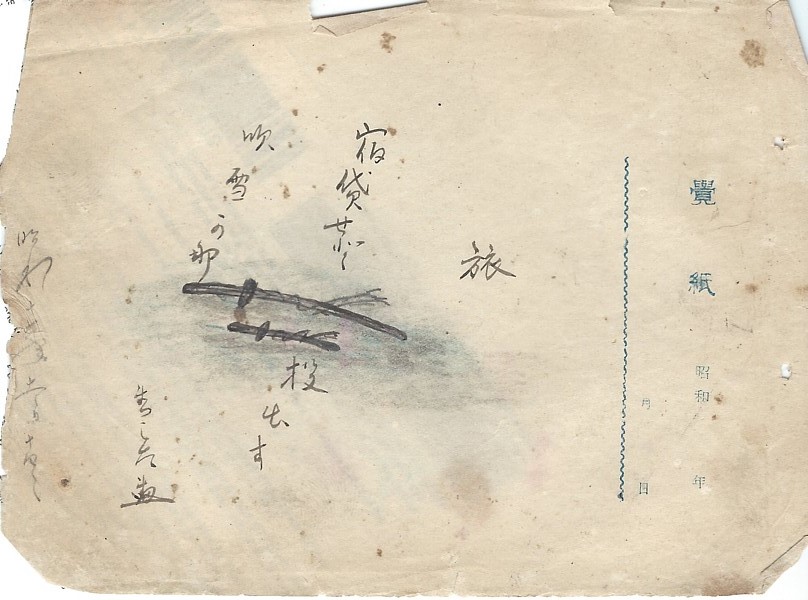 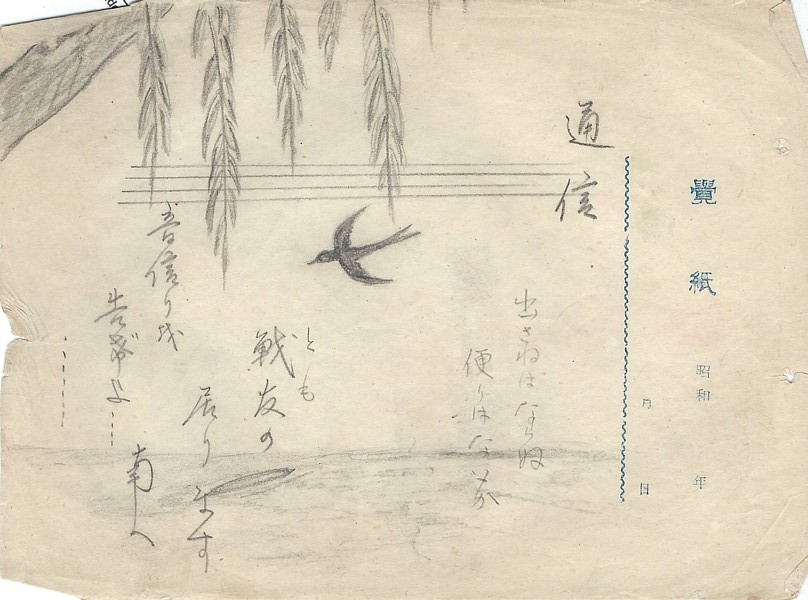 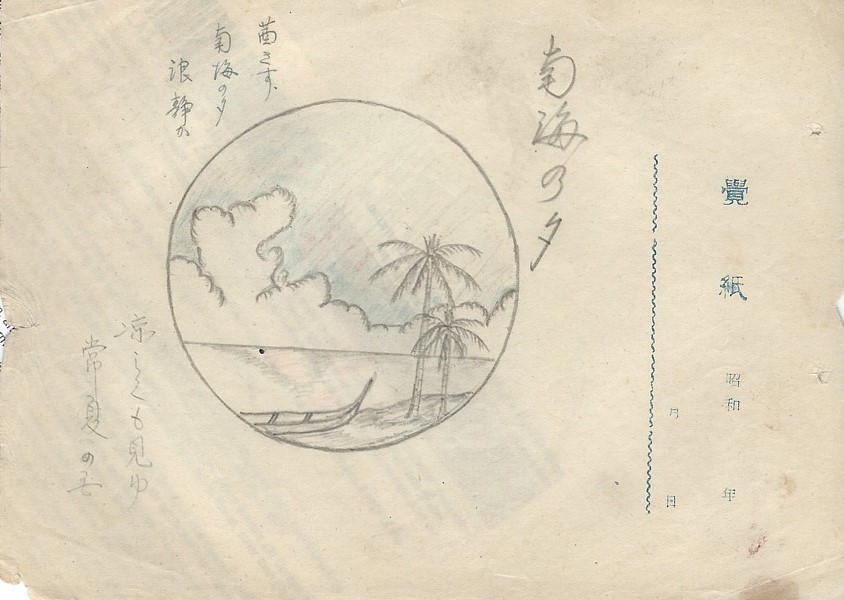 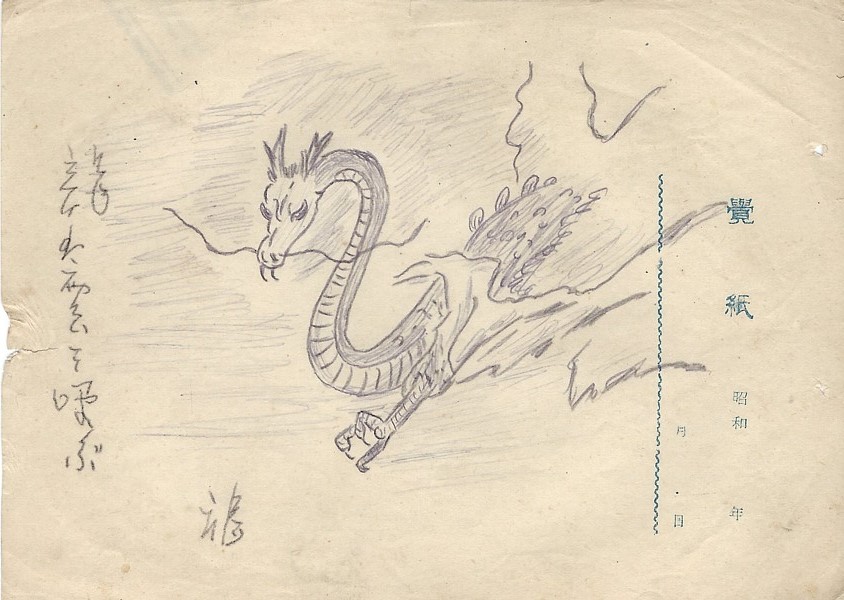 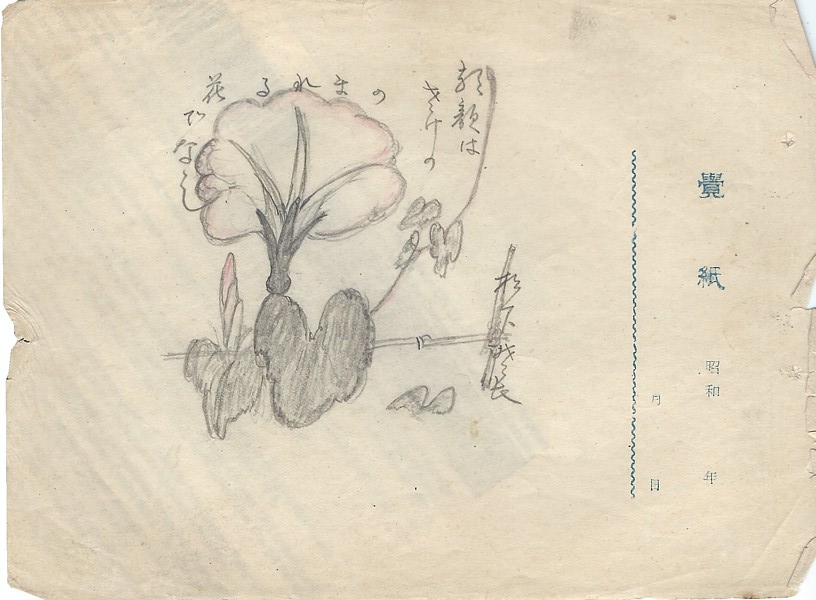 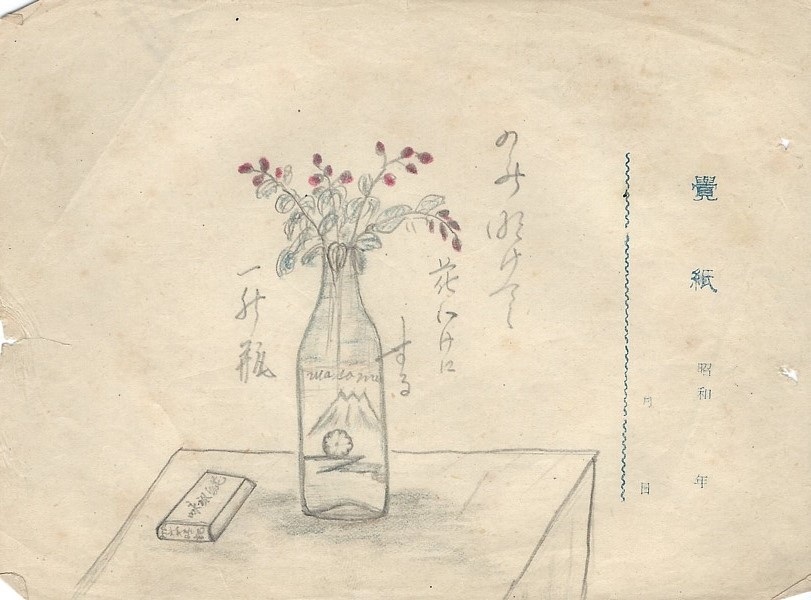